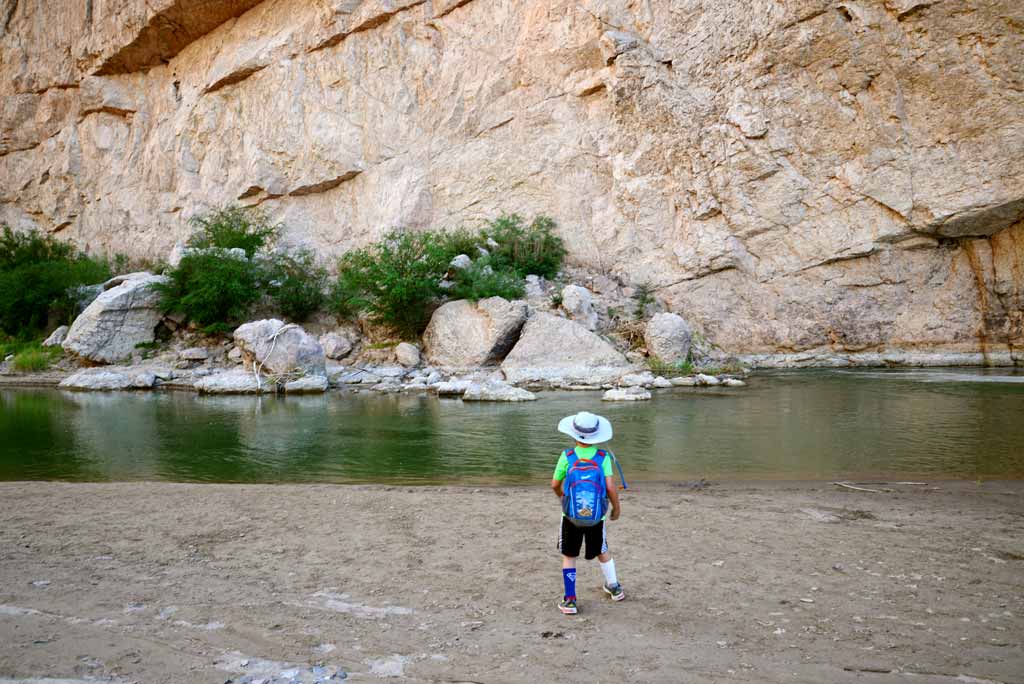 Our first hike is at Boquillas Canyon. It is another popular hike as it is pretty easy for everyone with gradual inclines and it gently heads down to one of the three canyons in Big Bend National Park. Not to mention, if you bring your passport and time it correctly, you can pass into Mexico and visit the town of Boquillas.

While you are there you can pick up your Boquillas stick – a light-weight hiking stick that is usually adorned with a painting of an animal or vegetation. These make great souvenirs for the kids.

If you are unable to cross the border the Boquillas sticks are pretty easy to find around Big Bend National Park in the various stores and centers. They are cheaper on the border ($5-8) but you will not spend more than $20 either way.

Notably, Boquillas is famous for “Singing Mexican.” As you descend toward the river listen for bars of “Ay – yai – yai – yai!” ringing out. Do not be alarmed it just means you are in the right place. Unless border patrol has come through recently, you will likely see small handmade trinkets, Boquillas sticks, and other knick-knacks displayed on rocks on your way in. Next to each will be an empty coffee can or something similar as a way of honor-system payment.

As you come to the river’s edge look across and in the shade will be your singer. Sometimes he or a friend will be on the US side of the river (presumably setting up or moving out said trinkets). We did hear the singer but did not meet anyone as we reached the beach.

At the beach, you can move to your left, and eventually you will run out of room. To leave you simply retrace your steps. The round trip is just under 1.5 miles.

On our way out we were followed by two puppies who had crossed the river. The children were extremely worried about them and wanted to adopt them! They hung out with us for a while but eventually went back to the river (and hopefully their mama!).

Evidence of Native Peoples at Boquillas

Before we went back up the steps to leave the beach area we went straight along the river. In the stone there were several mortar holes that native peoples had made and used thousands of years before.

On the whole, Boquillas was our family’s favorite hike so far. Was it because of the singing and puppies? We’ll never know but it is a fun one!

RETURN TO:
Day Five: Hiking with kids and Boquillas, Hot Springs, and the Rio Grande

Not sure how this pic got on our camera, but it was pretty cute. And, you are most welcome – I photoshopped the fat people out of the background.

We have a Polaroid with some spare gone bad film.  We knew the film had been left in heat and toted around, who-knows-where, so we let the wee one go crazy.  Needless to say, he loved it and took some great photos, circa 1973.

Why a three year-old needs a barricade (you might wonder)? To keep Barricade (the Transforming Decepticon) out of his room, of course.

Day 11, Thursday, Oct 21: Old Jaffa “The eyes of Texas are upon you.  That is the sound they sing.. well – SOUNDS LIKE HELL!” This is how our day began. For thirty minutes Will sang himself the Aggie War Hymn until the alarm went off at seven and no longer…